In this 12-part series, I look at what makes each facility unique, and recount some of the key moments and stats* in the Pac-12 Era. We continue in this final installment with Washington’s Alaska Airlines Arena. 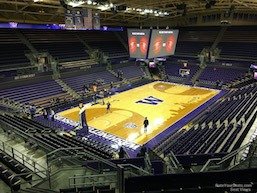 Constructed in 1927 and renovated in 1999, Alaska Airlines Arena at Hec Edmundson Pavilion is the oldest basketball stadium in the Pac-12.

When at full tilt, the student section’s ability to alter the course of a game is palpable.

n 2014, the Dawgs took the floor as the No. 13 team in the country, but struggled at other times during the Lorenzo Romar Era. With double-digit losses to South Dakota State, Oakland, and UC Irvine on the books since 2011-12, the arena has seen its fair share of ups and downs.

The turning point of Romar’s tenure, though, was a five-point defeat to fledgling Stony Brook in 2014 when UW was ranked No. 13. The program still hasn’t eclipsed that ranking five seasons later, and the Huskies have just one NCAA Tournament appearance since the Conference expanded.

Despite that, Washington has five wins over ranked Pac-12 opponents to go along with a victory over No. 13 San Diego State in 2014. When ranked, Romar and Mike Hopkins’ squads are a combined 11-2.

Entering his fourth season, Hopkins is responsible for the Dawgs’ best win of the Era, a three-point victory over No. 9 Arizona in 2018. In a wild ending that capped a memorable night in Seattle, Dominic Green drained a last-second three to take down the Wildcats led by Deandre Ayton. The student section rushed the floor, relishing the moment and celebrating the re-emergence of the program under Hopkins.

One year later, the team made their first NCAA Tournament appearance since 2010-2011, advancing to the Round of 32 as a 9-seed.

The momentum continued into 2019-20, when the No. 22 Huskies faced No. 9 Gonzaga at Alaska Airlines Arena. The matchup is the lone battle in the Pac-12 Era featuring two ranked teams, another achievement that has come during Hopkins’ tenure.

Though the Zags walked away with the win, the momentum in Seattle remained at its highest point in many years.

But with a litany of historically bad nonconference losses in the building, the student section must take it upon themselves to stop that from happening in the 2020s. It’s no secret that the home team plays better in front of hyped fans, and it shouldn’t take a Top 10 conference opponent to create that environment game-in and game-out.

For the Dawgs to take the next step, the onus is on students to make Hec Ed rock every game.