In this 12-part series, I look at what makes each facility unique, and recount some of the key moments and stats* in the Pac-12 Era. We continue in this fourth installment with Arizona’s McKale Center. 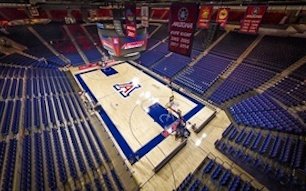 Within the Conference, the Cats are 67-14 including a victory over No. 3 Arizona State in 2017. Utah, USC, Stanford, Oregon State, and Colorado are winless in the building. And Arizona State, California, and Washington State have just a single victory.

UCLA and Oregon, however, have figured out how to win in the desert confine. Both the Bruins and Ducks are 4-3 during the Pac-12 Era, and the Wildcats have failed to beat either program when they enter the building ranked in the Top 25.

Washington has had similar success, posting a 3-4 mark during the period.

Arizona is the only team in the Pac-12 to take the floor at it’s home arena ranked No. 1 in the nation during the Pac-12 Era. The Cats played 8 games from 2013-14 ranked as the top squad in the country, going 8-0 over that stretch.

There has been just a single game against a Top 25 opponent when Arizona was unranked. Last season, Miller and company defeated No. 20 Colorado as an unranked program.

However, the absence of an Arizona victory over a ranked UCLA or Oregon team is a tell-tale sign of the recent trend in the two rivalries. The Cats have even dropped three games to unranked Bruin squads.

The 14-point loss to Washington State in 2019 is arguably the sole shocking defeat in the Era, though the 11-point loss to Bucknell in the 2012 NIT is similarly head-scratching.

Putting all that aside, there’s no denying that McKale Center is one of the toughest, if not the toughest, road game for every team in the Pac-12. The hostile environment is notoriously unwelcoming to opposing fans, and the Cats historically back it up with victories.