In this fourth installment, we scout Sun Devil Stadium. 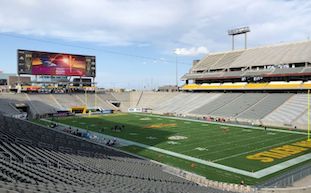 Set in the Tempe Buttes, Sun Devil Stadium is iconic. Home to the Arizona Cardinals for 17 seasons and host of the Fiesta Bowl for 35 years, the venue sits on the north end of Arizona State’s campus, just a stone’s throw from Tempe Town Lake.

And in the Pac-12 Era, the Sun Devils have played up to the level of the scenery.

Upsets over ranked opponents have come to be expected, especially at night.

Moreover, since the Conference expanded, ASU is 10-4 in the stadium when ranked, and only UCLA and USC have winning records in the desert confine.

Perhaps more importantly, Arizona State is 4-1 against rival Arizona, with the Wildcats’ last victory coming in 2011.

Opponents from the State of Washington are a combined 1-6 in Tempe, while the Mountain programs are 2-7. Oregon State, California, and Stanford are a combined 2-5.

Midwest teams can’t figure it out either, with Michigan State, Wisconsin, and Norte Dame each suffering losses at Sun Devil Stadium.

Maybe its the dry heat that causes wet-climate opponents to struggle? The stadium is, after all, in the driest and hottest city in the Conference of Champions.

Add in a rabid following among the roughly five million people living in Phoenix—plus “The Inferno” student section—and you have a recipe for success.

At 8-3 against Pac-12 opponents when Arizona State is ranked, 9-5 against Top 25 Conference opponents, and 45-16 overall, it’s clear that Sun Devil Stadium is among the most difficult places to play, not only in the Pac-12, but in the entire country.

Big 10 opponents learned the hard way, but the stadium would garner an even greater national reputation if a well-respected SEC team was served with an “L” during the 2020s.

With games over the next decade set against Mississippi State, Texas A&M, Florida, LSU, and Texas, the opportunity is there for the taking.