In this fifth installment, we scout UCLA’s home turf, the historic Rose Bowl. 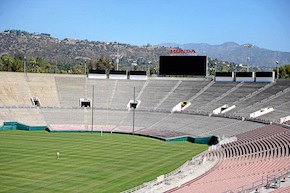 Built in 1922, the Rose Bowl—best known as the namesake of the “Granddaddy of them All”—has been the home of UCLA football since 1982.

Parking has historically been a mess, and traffic on the way to the stadium is typical for Los Angeles, but there is something special about the venue that makes it a bucket-list item for many.

The feeling in the air prior to night games is bolstered by the Southern California sunset and the unique aroma the Pacific Ocean brings to Pasadena.

The resulting anticipation, arguably unmatched in the Pac-12, can be summed up in just five words: This is the Rose Bowl.

Yet, during the Pac-12 Era, the Bruins have had mixed success.

Arizona State, USC, Arizona, and Colorado all have losing records in the stadium, but Stanford is undefeated, and Utah has just a single loss.

The nine wins over ranked opponents is respectable, although the victory over the highest ranked team was No. 14 Arizona in 2014. Without a win over a Top 10 program, the allure of the stadium loses some of its shine.

Perhaps the lack of opportunities is partially to blame, as Oregon and Washington have played just two games each in Pasadena since 2011.

Still, Josh Rosen’s comeback against an unranked Texas A&M team won’t ever be forgotten, and the 14-8 mark when the Bruins are ranked shouldn’t be overlooked.

Nor should the 5-3 record in matchups featuring two Top 25 teams, and the undefeated streak against nonconference opponents when UCLA is ranked.

At the same time, breaking even against Pac-12 opponents when the Bruins are ranked might be the Achilles Heal of the program since 2011.

Even so, there’s no denying the losing record of every team in the South outside of Utah, and the upper hand against the Trojans.

With Chip Kelly apparently poised to break through, the next decade might turn out to be even better than the last.

If Kelly is able to get it done, the low attendance woes of his tenure in Westwood could flip and even exceed the heyday of the Jim Mora Era.

Such a sight would be more than welcomed by the Pac-12, and would harken to the fading early days of the expansion.

Build it back, and they will come.

Records of Pac-12 Teams at the Rose Bowl