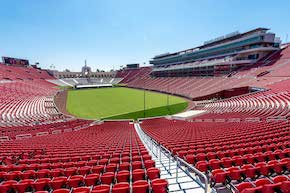 One of the most recognizable stadiums in the world, the Coliseum is arguably the crown jewel of the Pac-12.

Walking up to the entrance gates, fans can’t help but be reminded of the Olympic history of the venue: It’s a special feeling that only the Coliseum provides.

Mix in the lighting of the torch at the start of every fourth quarter, and the tradition of the venue shines through.

And with 47 wins at home since 2011, the Trojans play like it means something.

Only Oregon has a winning record at the Coliseum since the Pac-12 expanded, and USC took the field as the No. 1 team in the country in 2012.

Arizona, Colorado, Oregon State, and Utah are winless in the stadium. While Cal, UCLA, Washington, and Washington State have just a single victory each.

But scratching beneath the surface reveals two fatal flaws. The Men of Troy are 0-2 against ranked nonconference opponents and have a losing record in matchups featuring two Top 25 teams.

There aren’t many programs in the country that can be disappointed with such levels of success, but the bar is different at SC.

Failing to topple a ranked nonconference opponent is an unforgivable sin, exacerbated by ceding control of the Pac-12 to Oregon.

The Ducks’ 3-1 mark at the Coliseum is evidence of the sea change that has occurred since expansion, making the wildly successful records against the rest of the Conference fall by the wayside.

For USC to climb back into the driver’s seat, the Trojans must turn things around against UO in L.A.

Failing to do so will further relegate the program to second fiddle in the Pac-12, a status that has become all too familiar to the fan base over the past half decade.

The future matchups with Notre Dame provide an opportunity to move the needle in the nonconference season, but it all starts with taking care of business against the top dog.

If that doesn’t happen, demand is sure to increase for a change at the top.